When it comes to editing images and photos on the Linux desktop, the first application that comes to mind is The GIMP. And with good reason: The GIMP is big, powerful, and flexible.

It's also a bit much if you only need to do some basic image editing. Not everyone is a professional photographer or designer. Most of use only need to do basic tasks like cropping, resizing, minor retouching, and the like.

A good option for that is Pinta. To paraphrase Jack Tramiel, Pinta is image editing software for masses, not classes. It's reminiscent of Windows Paint, but with a few more features. Features that you might actually use.

Let's take a quick look at how to do some basic image editing with Pinta.

There are a few ways you can do that. First, try your Linux distribution's package manager or, if it has one, software centre. You can also install Pinta via Flatpak or as a snap package.

And if you really want to embrace your inner geek, download the source code and compile it yourself.

Fire up the application. If you've used paint or image editing software before, Pinta should look familiar. 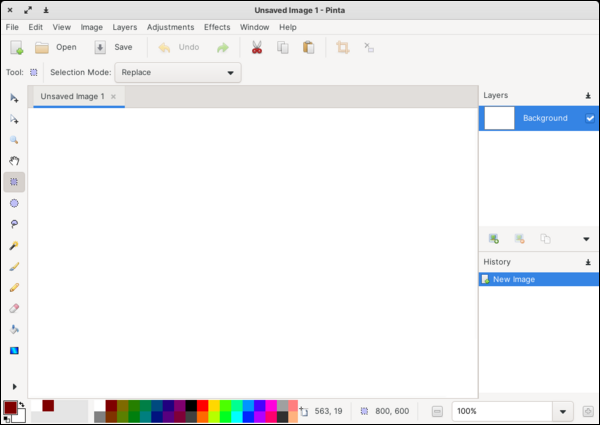 Open the image that you want to edit. Pinta supports the image formats that you'll most commonly use — PNG, JPEG, BMP, ICO, TIFF, and TGA. I only use Pinta to work with PNG and JPEG files, in case you're wondering, so I can't comment on how the application handles those other file types. 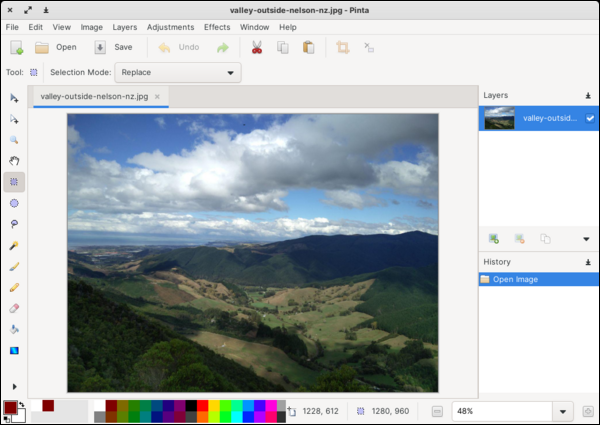 So, what you can you do with an image? Under the Image menu, you can choose to:

From the Effects menu, you can:

From the Adjustments menu, you can:

Here's the photo I was editing above, having been sharpened, with the contrast changed, and converted to sepia: 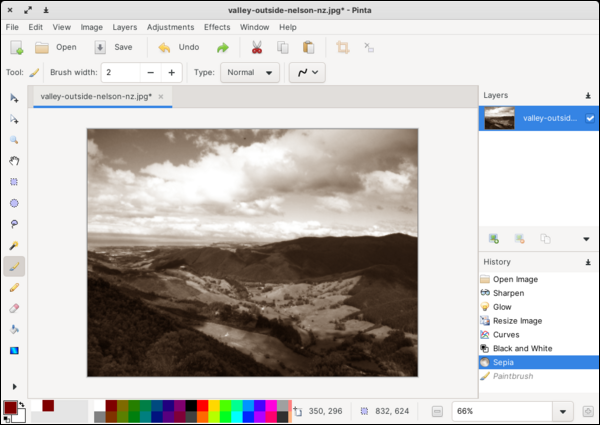 Working with the Paint Tools

You'll notice in the screen captures in this post, and if you work with Pinta, the vertical toolbar on the left side of the application screen.

Use those tools to:

You can set the foreground and background colours of shapes you draw, and for flood fills, using the toolbar at the bottom of the screen.

It's all very familiar if you've worked with image editing software before.

A Few Other Features

I only use Pinta to edit photos and screen captures. That means that there are several functions that I never use, but which you might find useful. A few of these are:

There are a number of things that The GIMP can do but Pinta can't. Then again, I have no idea what many of those functions are or how I'd ever use them. And I don't believe that one piece of software fits everyone's needs, not matter what some so-called power users say.