Mix in Some Cream to Make Vim a Bit Friendlier

(Note: This post was first published, in a slightly different form, at Opensource.com and appears here via a CC-BY-SA 4.0 International License.)

Fifteen or so years ago, I split my text editing time between both Emacs and Vim. That said, I was more of an Emacs guy. But while Emacs had an edge in my affections in those days, I knew (and still know) that Vim is no slouch.

So do other people even though who, like me, are all thumbs technically. Over the years, I've talked to a few new Linux users who wanted to use Vim but were a bit disappointed that it doesn't act like the text editors they've used on those other operating systems.

That disappointment changed to satisfaction when I introduced them to Cream, an add-on for Vim that makes it easier to use. Cream turned each of them into a regular Vim user. And, thanks to Cream, most of them still are to this day.

In a post that's bound to trigger a couple or three hard-nosed Vim purists, I'm taking you on a short tour of Cream and how it makes Vim easier to use.

Before you can install Cream, you'll need Vim and GVim GUI components installed on your computer. The easiest way to do that is to use your Linux distribution's package manager.

Once you have Vim installed, grab the installer for Cream or, again, turn to your distribution's package manager.

Once Cream is installed, you can fire it up by selecting the entry from the application menu (for example, Applications > Cream) or by typing cream into your program launcher.

Here's what the editor looks like when you start it up: 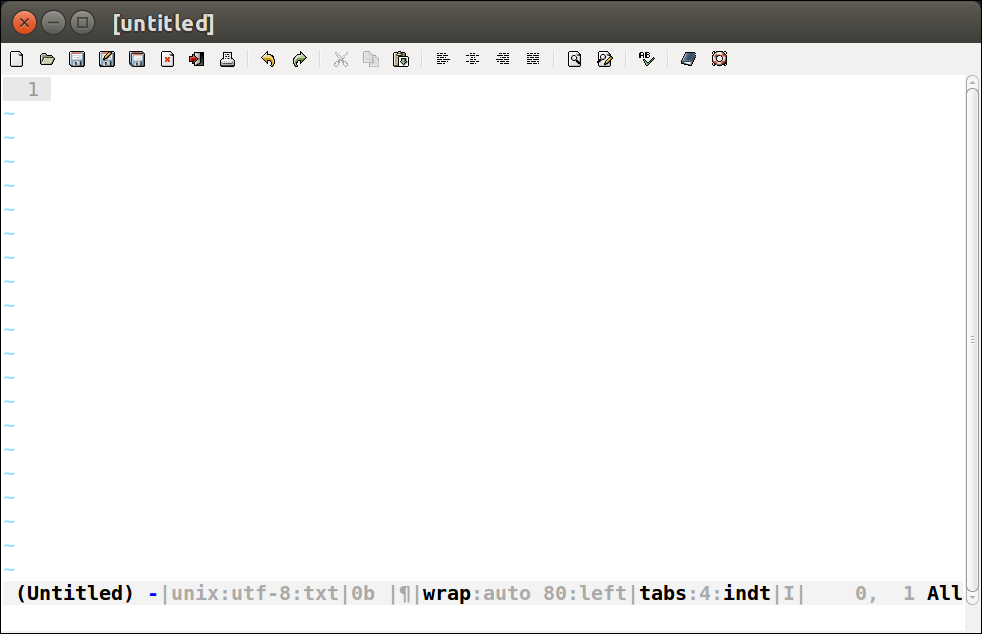 If you've used GVim before, you'll notice that Cream doesn't change the editor's look and feel too much. The biggest cosmetic differences are Cream's menu bar and toolbar, which replace the stock GVim menu bar and toolbar with ones that look like and group functions like their counterparts in other applications.

Cream's menus hide a lot of the more techie options — like the ability to specify a compiler and the make command — from you. As you get more familiar with Vim by using Cream, however, you can make more of those features more easily accessible by selecting an option from the Settings > Preferences > Behavior menu. With those options, you could (if you want to) wind up with an editor that behaves as a hybrid of Cream and traditional Vim.

Cream isn't only driven by its menus. While the editor's functions a click or two away, you can also use common keyboard shortcuts to perform actions — for example, CTRL-O (to open a file) or CTRL-C (to copy text). There's no need to shift between modes or remember Vim's somewhat cryptic commands.

With Cream running, get to work by opening a file or creating a new one. Then, start typing. A couple or three of the people I've introduced to Cream have said that while it retains much of the classic styling of Vim, Cream feels more comfortable to use.

Here's a shot of Cream at work: 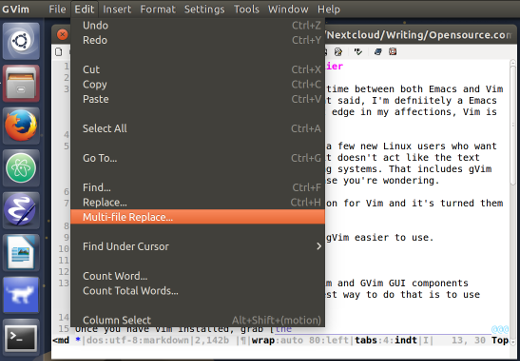 That's not to say mixing Cream into the editor dilutes Vim. Far from it. You still retain all of Vim's features, along with a long list of others.

Some of the features of Cream that I find useful include:

Cream also comes with a a number of add-ons, which give the editor some additional features. Those features include the ability to encrypt text, to clean up the body of emails, and even a typing tutor. To be honest, I haven't found any of the add-ons to be all that useful. Your mileage might vary, though.

I've heard a more than a couple of vi/Vim purists pooh-pooh Cream for dumbing down (their words) the editor. Let's be honest: Cream isn't for them. It's for someone who wants to quickly get up and running with Vim, while retaining the look and feel of the editors they're used to. In that way, Cream succeeds admirably. It makes Vim a lot more accessible and usable to a wider range of people. And there's nothing wrong with that.