Taking Zorin OS for a Spin

I've never been a distro hopper. Since I first installed Linux on a Pentium 300 desktop in 1999, I've only mainlined perhaps four or five distributions. And always for the longer haul — when a Linux distribution gets plonked on to my hard drive, it usually stays there for years. There's only been one case when that didn't happen, but I don't like to talk about it much.

That said, I have test driven more than a handful of Linux distributions, either via a live CD or live USB, since early 2000s. A few have impressed me. One or two were frustrating. The others left me feeling a bit cold or just ambivalent.

But one distro I hadn't taken a close look at is Zorin OS. It's a distribution that I'd heard about more than once over the years, and usually in glowing terms. Until recently, though, Zorin OS was never strongly enough on my radar for me to give it a go.

In July, 2022 curiosity (for whatever reason) gripped me and I took an extended peek at Zorin OS using a live USB. I liked what I saw, and installed it on my spare laptop. I also decided to use that laptop and Zorin OS as my daily driver for several weeks.

Let's take a look at what happened.

There are two main editions of Zorin OS, both derived from Ubuntu: Core and Lite. Core uses the GNOME desktop. Lite, aimed at older computers, uses Xfce as its desktop. You can install the Lite edition on newer hardware, too.

There's also a Pro edition, which costs $39 (USD). For that amount, you get additional desktop layouts and themes, advanced software pre-installed, and a few other perks. Whether all of that is worth the price is up to you, but remember the money that changes hands helps fund the development of Zorin OS. It's something to consider.

In case you're wondering, I chose the Core edition for my experiment.

Getting Up and Running

You need to download the ISO image of the edition that you want to use and then create a bootable USB drive. From there, you can start your computer in a live session without needing to install Zorin OS.

I'm not going to explain how to create a bootable USB drive in this post. You can find some useful information about doing that in this article.

Let's say you've been testing Zorin OS, found you like it, and have decided to take the plunge and install it. To kick off the installation, double click the Install icon on the desktop. Before you do that, though, make sure you've backed up your files and other important data. If you install Zorin OS over your current operating system, that information is gone. For good.

There's also an option to install Zorin OS beside your current operating system. In all my years of using Linux, I've never tried that. I'm going to assume that doing the side-by-side install works. Just don't quote me on that.

Like just about every Linux distro out there these days, Zorin's graphical installer walks you through the installation. The entire process takes about 10 to 15 minutes. Once that's done, restart your computer, log in, and you're ready to go.

If the DIY thing isn't your thing and you have some money lying around for a new computer, you can get one with Zorin OS pre-installed from Star Labs or Laptop with Linux.

When you start up Zorin OS, you see a clean, attractive, almost minimalist desktop. The basic layout of that desktop is similar to Windows. Zorin OS also has three other desktop layouts, which I'll look at in a moment. 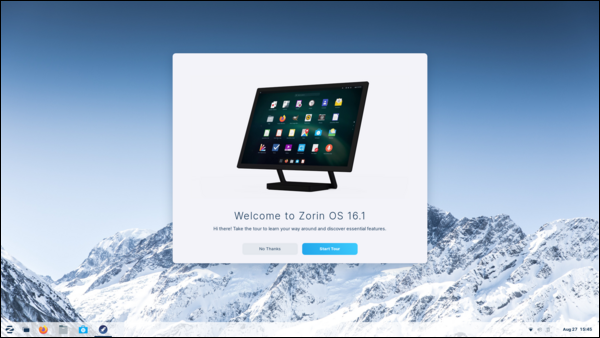 Out of the box, Zorin OS has everything many folks need to get started doing what they need to do. The software that comes preinstalled includes LibreOffice, Firefox, The GIMP, Gedit, a calendar, and Evolution for email and tasks. Just choose what you want to use from the menu and away you go, as shown below: 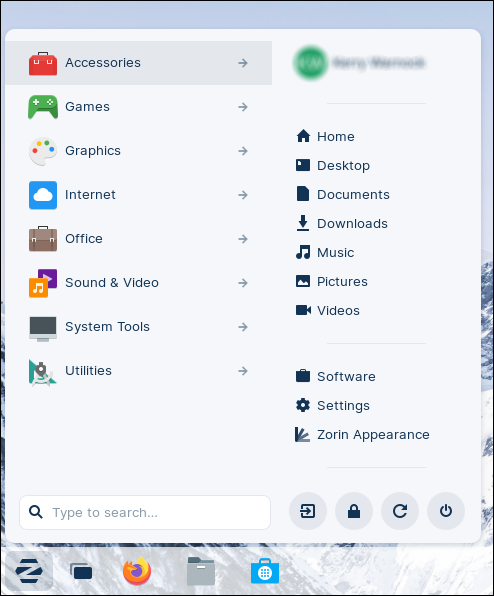 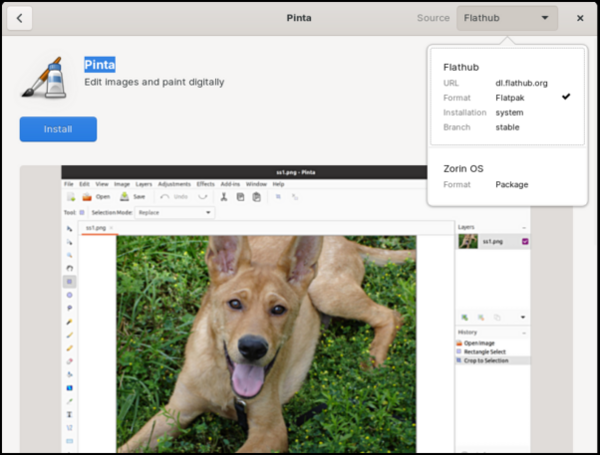 Of course, you can run AppImage and Electron applications that you download, too.

Other than that, using Zorin OS is just like using any other Linux distribution. And sticking with the default desktop can make it easier for people transitioning from Windows to Linux to adapt to a new environment.

I didn't, and still haven't, noticed any lags or slowness. The laptop on which I'm running Zorin OS is just over four years old, with a 500 GB SSD and 16 GB of memory. It doesn't have fastest or latest processor or graphics card and I'm usually not running any more than three or four applications at a time. Still, the experience is quite smooth.

There have been no problems printing or scanning documents with my wireless all-in-one device. Not that I print or scan much, but it's seamless when I need to do either.

I was also able to quickly configure my VPN in the Network Manager application by importing configuration files provided by my VPN provider. That didn't come as a surprise, but I had to make sure. And firing up a VPN connection by clicking the wifi icon definitely beats starting the app that my VPN provider created. Not that it's a horrible app by any means, but if I can have on less piece of software on my computer I'm happy.

Changing the Look and Feel

Out of the box, Zorin OS has a very Windows-like look and feel. There's a task bar running along the bottom of the screen, and you click a Start menu-like button to access applications and settings and such.

If that doesn't quite work for you, can run the Zorin Appearance application: 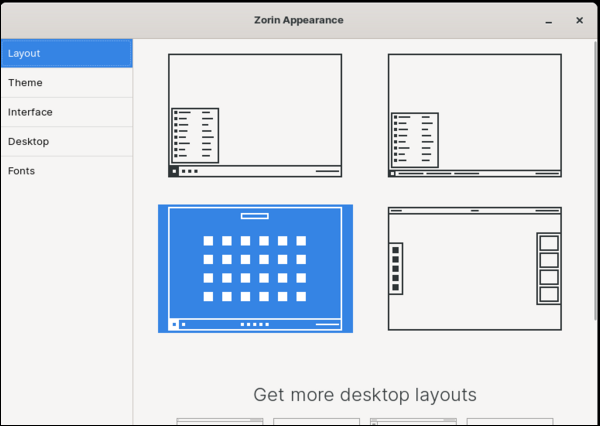 From there, you can switch to one of three other desktop layouts:

Windows List-like, which is similar to the default desktop with a narrower task bar: 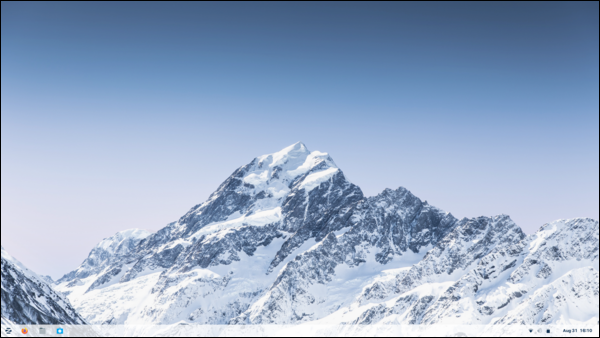 Touch, which brings up a list of application icons in way that's reminiscent of a mobile device, of Ubuntu Touch, or of ChromeOS: 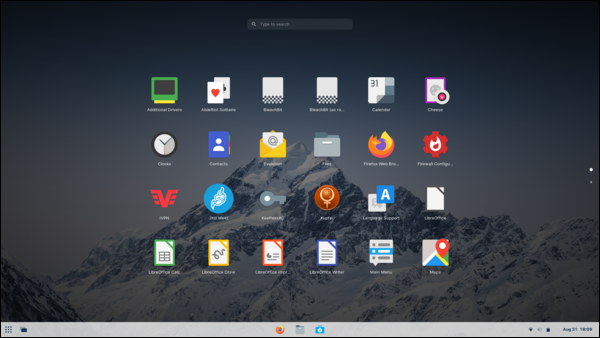 GNOME Shell-like, which mimics the behaviour of the default desktop in distributions that use GNOME: 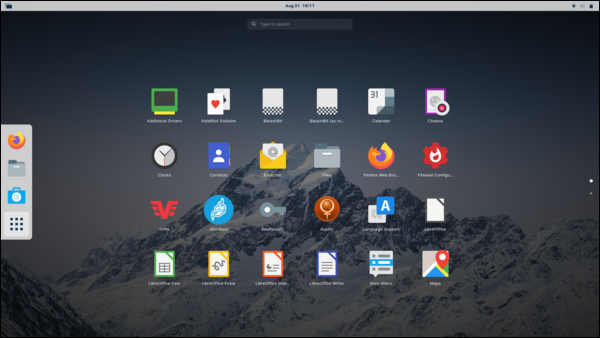 The Pro edition also includes desktop layouts similar to those found in Windows 11, Ubuntu, macOS, and what the folks behind Zorin OS called Windows Classic. From the screenshots I've seen, I'm not sure how the latter differs from the default desktop in the Core edition, to be honest.

Zorin Connect is an interesting feature of this distribution. It enables you to connect your phone to your desktop over wifi with an Android app. From there you can, among other things, do this:

I'll be taking a closer look at Zorin Connect in a future post.

Every so often, software doesn't install from the Software app. The progress meter stays at 0% for the longest time. I have to close the Software app and try again. That usually does the trick.

I can't find way to change the desktop background to a solid colour rather than using an image. Since my desktop is rarely visible when I'm working, I have no need for extraneous decoration. I hope this isn't an Pro option ...

If I change the desktop layout, I need to reset to the position of the controls in the title bar of applications. By default, they're are on right but prefer to have them on the left.

I can't delete bookmarks from the sidebar of the file manager. The Remove option is grayed out and I can't find a setting to change that. Again, I hope this isn't an Pro option.

This isn't specific to Zorin OS, but the distro comes with a lot of fonts installed for languages that I don't speak or read. Fonts which I never use. Over 300 MB of them. I'd prefer that those fonts be opt-in, rather than opt-out — they should be dropped on to your hard drive after you chose the default language when installing Zorin OS (or any distribution) rather than having to remove them afterwards.

I went into using Zorin OS with what I hoped was an open mind. I wasn't sure what to expect. What I found was a very attractive, easy-to-use, and fairly configurable desktop. Not that the configurable part is a big deal for me — don't do too much tweaking in that area.

I had no problems using, or getting used to, Zorin OS. The look, the feel, and the layout is familiar — not just to a long-time Linux user, but also someone who's used Windows or even Chrome OS. As a friend said, Zorin OS could be a good option to migrate Windows or macOS users to Linux.

Also, I had no problems doing what I do on a computer daily. That's mainly writing, editing images, browsing the internet, communicating with friends and family, and doing various bits of other work. Not that I didn't expect to be able to do all that, even in a slightly new environment. Once I installed a few additional pieces of software, using Zorin OS was just like using any other Linux distro I've used in recent years (albeit with a slightly different skin).

Overall, Zorin OS is definitely one of the better general-purpose Linux distributions I've tried over the years. I'll be keeping Zorin OS on my spare laptop for the time being. In the future, it might wind up being an option for my StarLite laptop.