Two Scratchpads for the Linux Desktop

(Note: This post, in a different form, was first published at The Plain Text Project and appears here via a CC BY-NC-SA 4.0 license.)

Once upon a time, people did that with pen and paper using something called a scratchpad. Actually, they still do. Using a paper scratchpad works, but why scramble for analog tools when you can go digital? And why use something complex when you can use plain text?

You could, as I just mentioned, have a thought or idea. Something that you need to do or someone whom you want to contact. A scratchpad can be an extension of your short-term memory. Use one to put down whatever’s popped into your head before it fades away.

A scratchpad is a transitional space. You move what’s on the scratchpad in something, more permanent later.

You can also use a scratchpad to store more persistent text — for example, snippets of code or boilerplate wording that you regularly use.

Your digital scratchpad should be close at hand. That could be within the tool you’re using or in a dedicated scratchpad that’s running in the background.

Why a Dedicated Scratchpad?

Those are little utilities that run in the background. When you need to use a scratchpad, press Alt+Tab to switch to it. Type what you need to type, and then go back to what you’re doing.

The main advantage to using a dedicated scratchpad is persistence. It saves what you type automatically, and holds on to it even when you close the application. If you’re using a tab in a text editor and accidentally close it, you lose what you’ve typed.

I’ve only used two dedicated scratchpads: Nanonote and FromScratch. Both are very minimal apps, which automatically save what you type on your hard drive.

Nanonote is the simpler of the two scratchpads I'm looking at in this post. It’s like having a very simple text editor open on your desktop: 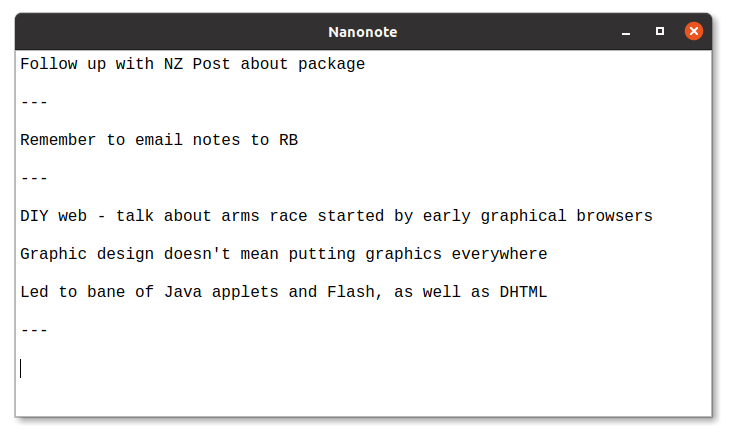 Nanonote isn't much to look at, but it gets the job done.

FromScratch does the same thing as Nanonote (what a surprise!), but packs a few more features. It runs on Linux, MacOS, and Windows, automatically indents text, and lets you fold what you’re jotting down. 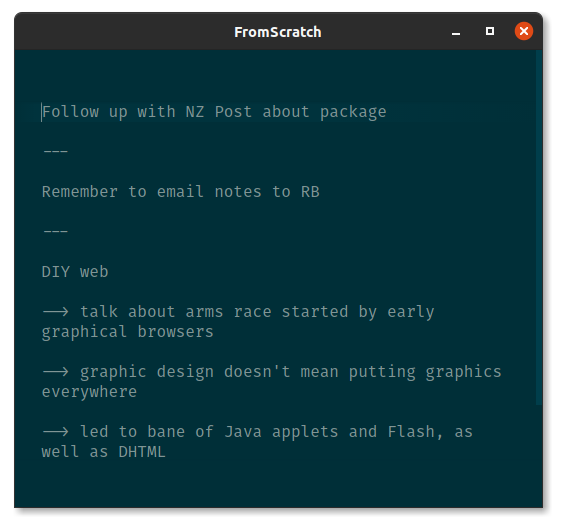 If you work in plain text, chances are you’re also working with a text editor. And that’s the perfect place for your scratchpad.

Users of the Emacs text editor are familiar with a buffer called *scratch*. It’s there when you start up the editor. That’s great for those folks who use Emacs, but not everyone does.

Instead, you can have a tab open to use as a scratchpad. Whenever something jumps to the front of your brain, just click that tab and type. Then, click back to the tab on which you were working.

Some text editors even hold on to what's in a tab even if you don't save it. I've only seen that with a couple — Notepad++ (which I use at The Day JobTM, a Windows shop) and Code, which I use in elementary OS. 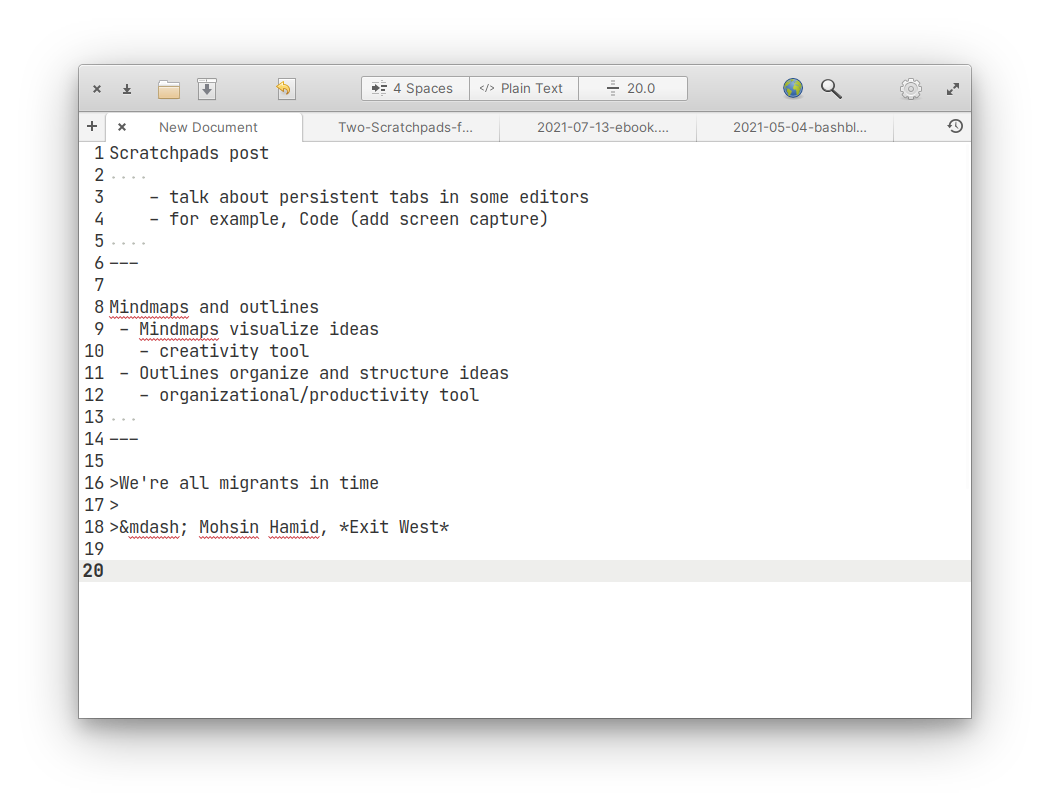 Once you get used to doing that in an editor, it doesn’t disrupt your flow much or at all. And you can get away with not installing another piece of software on your computer.