Writing in Markdown with Apostrophe

Once upon a time, I used a Linux distribution called Ubuntu quite extensively. One of my favourite apps for Ubuntu was a Markdown editor called UberWriter.

What made UberWriter a favourite was that it was minimalist. It was clean with no distractions. It was easy to use. And it had several nice features that complemented its aesthetics.

Then, one day, UberWriter started acting wonky on my desktop. I can't remember how or why, but it became practically unusable — and not just for me, either. I uninstalled it, opting instead for a text editor and never looked back.

Recently, though, a friend pointed me in the direction of a Markdown editor called Apostrophe. After doing a bit of poking around, I learned that the editor is UberWriter in a new guise. Of course, I immediately decided to give it a go. Here's what happened.

Check your distribution's package manager. You might be able to install Apostrophe that way. If you can't, you can download the source code and compile it.

Compiling code isn't an option for everyone, though. An easier way to install Apostrophe is to use Flatpak. Do that by running this command in a terminal window:

You will, of course, need to install Flatpak on your computer first.

You've got Apostrophe installed. Now, start it up. As I mentioned at the beginning of this post, it's a minimalist editor. 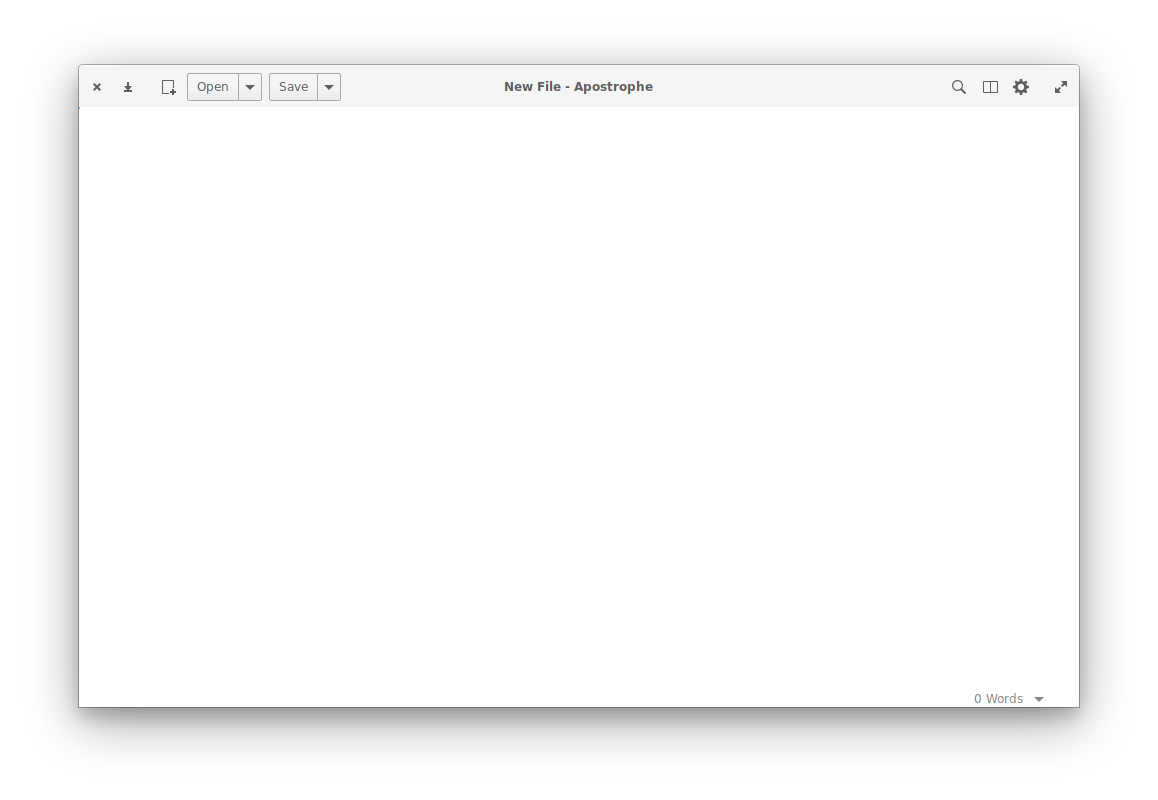 You can either open an existing file (move your mouse to the top of the window to display the header bar, which contains the Open button) or just start typing. 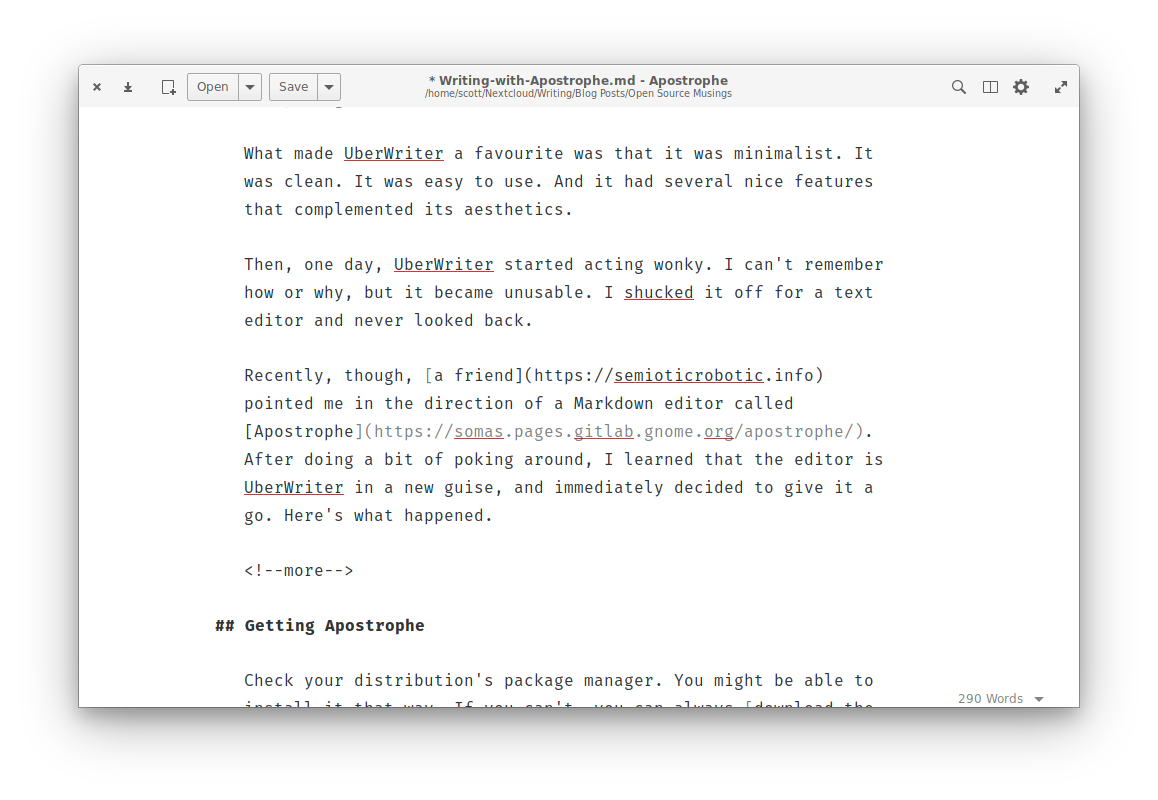 Nothing really new or revolutionary there. It's just simple text editing which highlights Markdown formatting.

There's no formatting toolbar. You either need to know Markdown (my book is a great reference, by the way!) or you can use keyboard shortcuts to insert frequently-used formatting. 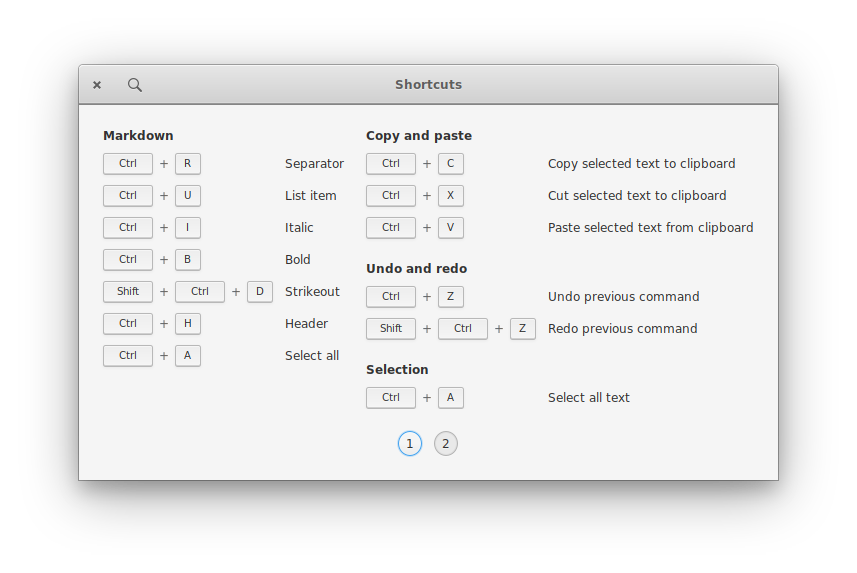 As I mentioned a couple of times already, Apostrophe is a fairly minimalist application. It does have some useful features, though. One of which is common to many a Markdown editor: a preview mode. Click the Preview button on the header.

That switches to a view of your document as it would appear as a web page or a word processor document. 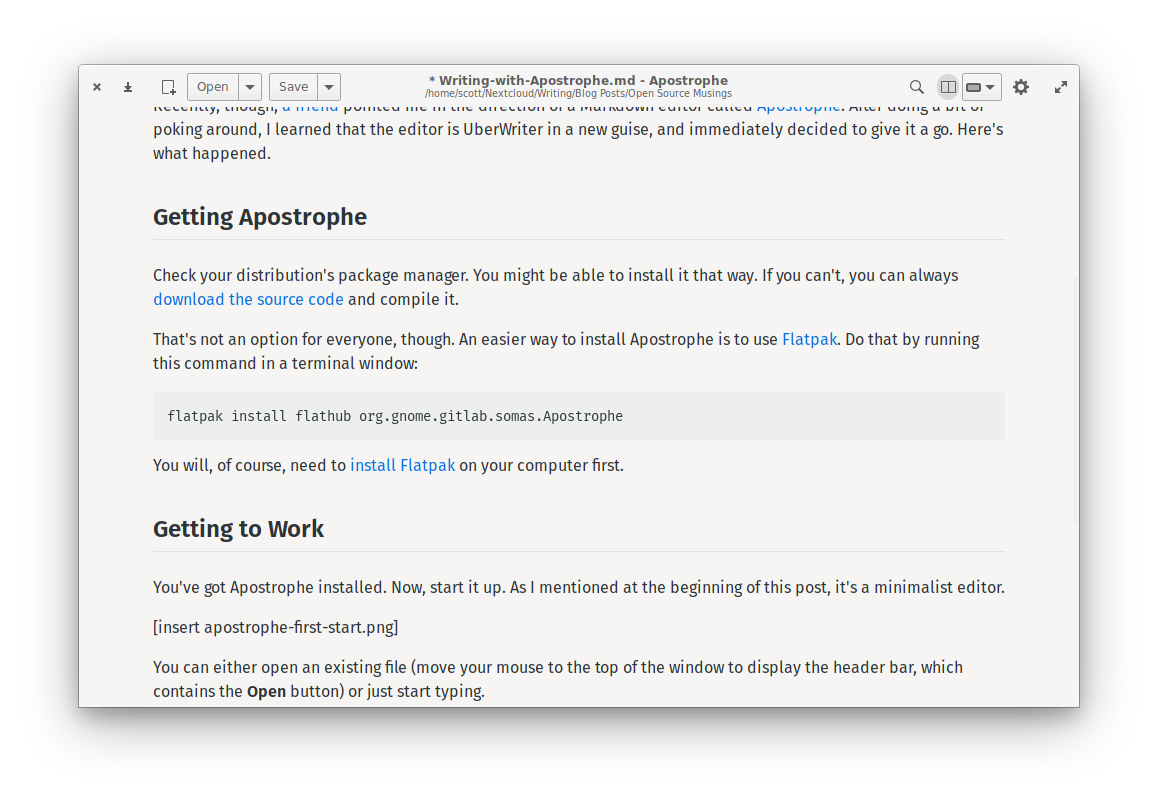 Unfortunately, you can't change the look of the preview.

Apostrophe's search and replace function isn't too shabby, either. You can do case sensitive searches and use regular expressions to find words or phrases in a document.

Other than that, Apostrophe checks your spelling as you type and displays a running word count in the bottom right corner of the window. You can turn that automatic spell checking in the application's preferences. And if you click the word count, you also get a breakdown of the number of characters, sentences, and paragraphs in what you're writing as well as an estimated reading time. 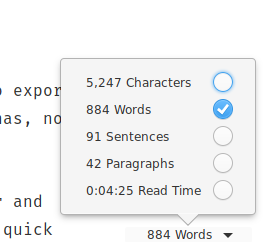 One of UberWriter's strongest features was its ability to export Markdown documents to several other formats. Apostrophe has, not surprisingly, carried over that feature.

To export a file, click the Save button in the header and choose one of PDF, HTML, or ODT. That does a quick and dirty conversion to those formats. You'll need a TeX system installed on your computer to generate a PDF.

The default output is serviceable, though not fancy as you can see from this PDF: 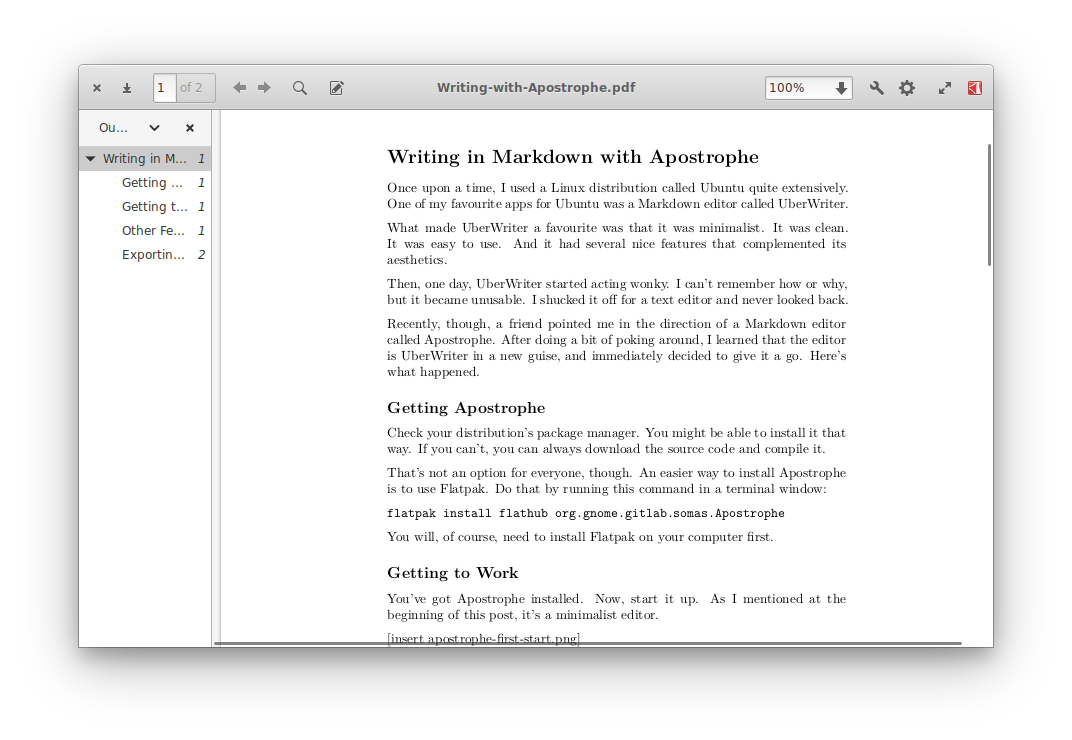 I hinted more output options, didn't I? Well, that's where the Advanced Export option under the Save menu comes in. You can use that to export your documents to these formats:

All those formats have several options, like including a table of contents, numbering sections, and changing the page size. 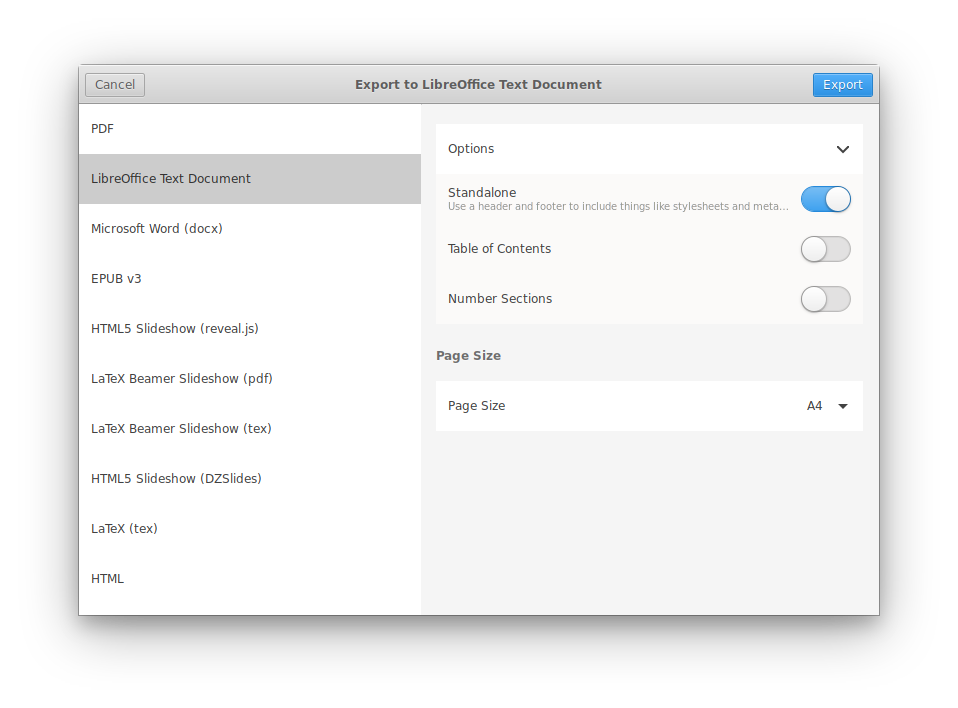 Because I've been staring at screens (often smaller ones) since the late 1980s, my eyesight has weakened. A little over nine years ago, I had to start wearing glasses while working at a computer. That also meant finding a suitable font, and increasing the size of the font, in the text editors that I use.

I can't do that with Apostrophe. And I tried to find a way to do the deed. It seems to be a known issue with the application. At the moment, not being able to change the font isn't a deal breaker for me, but I know a few people for whom it is. That said, I'd prefer to be able to use 16 point IBM Plex Mono or Hack with Apostrophe.

It's great to see that Apostrophe has taken up the mantle of UberWriter. The latter was an application that I enjoyed using and missed having on my Linux desktop.