Writing in Markdown with Mark Text

(Note: This post was originally published, in a slightly different form, at The Plain Text Project and appears here via a Creative Commons Attribution-Share Alike 4.0 International License.)

Back in the early and mid-1990s, there was a boom in dedicated HTML editors. Those were a mix of code editor and WYSIWYG tools, which were designed to get more and more people publishing in the then-burgeonening World Wide Web. As the years passed, so did most of those editors.

Over the last while, something similar has been happening with dedicated Markdown editors. Not to the extent of their HTML-only predecessors from a few decades back, but there are more than a handful on the market.

Those editors range from being just glorified text editors to some which are quite good. One dedicated Markdown editor that I've been exercising a lot is Mark Text. It reminds me of an open source version of Typora. While not quite as polished as Typora, Mark Text is quite a flexible editor.

Download the version of Mark Text for your operating system — there are versions for Linux, MacOS, and Windows. Then, install it.

When you start Mark Text, it's a sparse, blank canvas. 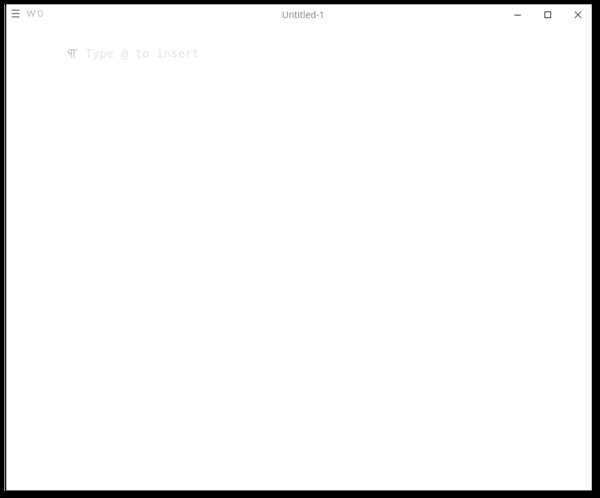 You can either start a new document or open an existing one. 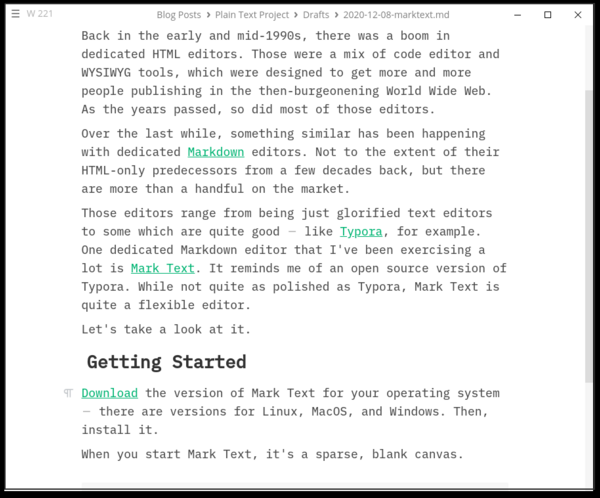 You can add Markdown formatting to your documents by:

There's nothing fancy there, but Mark Text does render the formatting rather than displaying markup. If you click on an item that's been formatted, the markup displays.

If you ever need to export your work, click on the stacker menu in the top-left corner. Select File > Export and then choose either HTML or PDF.

You can customize the output on these tabs:

To be honest, I was quite surprised at how much you can customize Mark Text. Configure the editor by clicking the stacker menu and select File > Preferences. 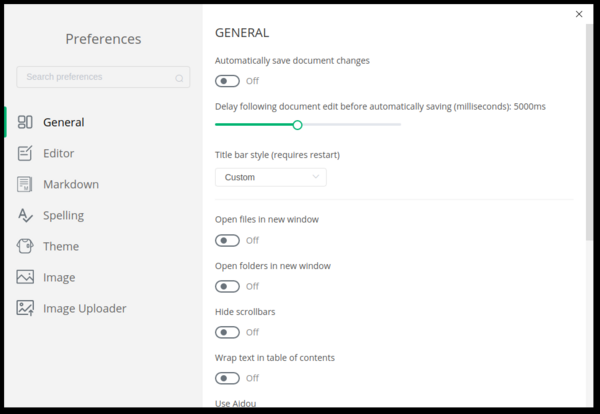 I won't go through the full list of configuration options — there are quite a few of them. Here are some of the options that you can set:

A Few Other Features

Like many pieces of software, Mark Text has a number of features that you might not use but which can be useful. Here's a look at a few of them:

The editor keeps a running word count in the top-left corner, beside the stacker menu. Hold your mouse over that and you also get a count of the characters and paragraphs in your document.

If you need to copy some or all of your document to another file, you can copy text as Markdown or as HTML. You can also paste text into the editor as plain text.

When you highlight some text, a small toolbar containing formatting options displays.

As I mentioned at the beginning of this article, Mark Text brings to mind an open source version of a Markdown editor called Typora. Sure, Mark Text doesn't have quite the polish that Typora does. It is, though, constantly improving.

Mark Text is a good choice if you're looking for an easy-to-use semi-WYSIWYG Markdown editor that packs a number of useful features. Mark Text might not be for everyone, but it might be for you.